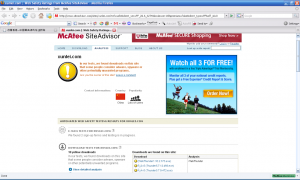 With the growth of Internet has also grown the chances of virus spreading. Not only is there now the fear of your machine being brought down completely but your important details being robbed from you. We innocently surf some web sites and these notorious websites just unleash their weapons onto our machines. They send in trojans and what not. The question is how do know of such sites. Well if there are people who want destroy us then there are people who want to help us as well. I personally had a bad experience. When I had taken a new internet connection I was eagerly surfing some sites and one of them must have dropped a trojan onto my machine. Luckily for me I had Google Sidebar installed which had a gadget called speedometer. Now, the next morning I woke up I found around 1G data was downloaded between night and morning. I was surprised so for two nights I spent investigating what was wrong. I had a friend who worked for Symantec. I contacted him and told about the situation. He told me that there could be some modifications in my boot file. But that file was clear. My PC by now had grown incredibly slow. I then came across a site which listed all the process which are essential and the suspicious one. And there it was I found a process which was the one which could have been potential cause of trouble. I deleted the file which was mentioned on the website. But the guys were smart it was a trojan which would regenerate itself. After some hammering around the internet I found that MacAfee could scan my laptop online. Or it was my friend who told me that MacAfee gave such a service I don’t remember right now. Nevertheless, I ran the scan I took good amount of time but it was able to get rid of the virus. Also, after that point I had the avast antivirus installed on my machine. It is a free home edition software but it has not let me down till date. Another important thing which I have installed on my both browsers Internet Explorer and Mozilla is the MacAfee TrendProtect and SiteAdvisor respectively. The TrendProtect lets me know which sites are safe to visit when I do my Google search. It lets me know by the means of small Green tick or yellow or red cross. They also let you know what the site downloads on your machine and what all programs are installed. Recently I happened to visit a Chinese site which showed movie online. When I saw the statistics I was just amazed how many programs it downloaded which had nothing to do of your watching movie online. Also, the Google sidebar alerts me sometime when I happen to visit some site for free download of software. Pretty much neat and useful tools which I think would do us good.