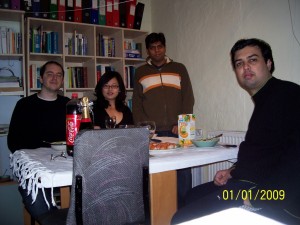 Wishing you a very happy new year. This is the first time I really celebrated the New Year. Most of the times it was just keeping awake to see the old man burn just below the window at our house in India. This time though it was a proper party (Courtsey, WeiWei and Manuel). We left early from office on 31st. The New year understandably is a big event here like Diwali for us in India. 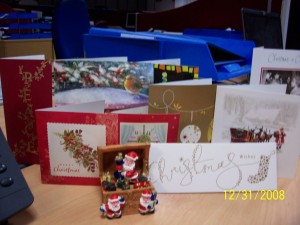 With all our contributions to the party we reached home and eagerly waiting for WeiWei and Manuel to feed us with the treat. WeiWei really cooks good chicken. Apparently that was one reason I was insisting on her coming to the party. Actually I had expected she would be cooking at my place but she chose to do so at her place.

Finally the yummy meal arrived of course with our guests (quite ironic). It was a very good meal of Chips,Sushi,Cream soup and Chicken.I had reservations about sushi but the Sushi was nice as well. The newest addition to our work force to our team Ritesh stays with me, he was good company to Manuel who is a Airplane enthusiast. Both seem to get along very well on the topic. While they carried on with their topic; WeiWei and I just looked on to them. All went well except the heating at my place which is terrible. As all of us disclosed their New year resolution, more travels , more flights was the common voice. I have none as yet.

As the clocked chimed twelve we had 12 grapes with each chime and then glass of champagne for all except me . I just had a glass of orange juice. The tradition of twelve grapes comes from Spain. Manuel believes in it strongly. He says one year he did not do it and was not a good one. He says this tradition started from a year in Spain when they had huge harvest of grapes and government decided to get rid of the same through coordinated efforts.

Wishing and hoping that New Year 2009 goes very well and brings us peace, light and happiness we parted.